Links are at bottom of page-

This year's unit meeting was held in Mechanicsville, VA. Captain Sheldon Bell was unanimously elected to lead us again. In order of rank, the same individuals will remain in the positions as 2018: 1st Sgt James Whitehead, 2nd Sgt Gary Parisi, Ordinance Corporal Bob Bishop, Treasurer Katie Whitehead, and Secretary Michael Spencer Jr. As seen on the Home page, we have several events throughout Virginia, as well as West Virginia, Pennsylvania and North Carolina this year.

This year's unit meeting was held again at The Italian Kitchen in Mechanicsville, VA. Captain Sheldon Bell will continue as the man to lead us into the coming campaign season. Richard decided to decline from running this year and is returning to the ranks as a private. Gary Parisi remains our 1st Sgt, with Brad Johnson as our 2nd Sgt. and company treasurer. Rob Powers continues his work as the unit scribe, while Corporal Bishop remains the steady ordinance officer. The schedule for 2014 can be viewed on the Home page of this site.

This year's unit meeting was held at The Italian Kitchen in Mechanicsville, VA. After three great years under the leadership of Captain Oates, the unit elected 1st Sgt Sheldon Bell as the man to lead us into the coming campaign season. Richard decided to decline from running this year and is returning to the ranks as a private. Gary Parisi moved up from 2nd to 1st Sgt, continuing his steady rise up the ranks. The new 2nd Sgt is now Brad Johnson, a long time member and also currently the company treasurer. Rob Powers continues his work as the unit scribe, while Corporal Bishop remains the steady ordinance officer. The schedule for 2013 can be viewed on the Home page of this site.

The unit held the annual meeting, with a few officer changes this time around. With Captain Durvin declining to run for another year, 1st Sgt Richard Oates was elected to command the 53rd VA, Company H. The new 1st Sgt is Mike Spencer Sr., 2nd Sgt went to Mike Spencer Jr., and Gary Parisi became the new Corporal. Alvin Slaughter remains as the 53rd's very capable Ordinance Corporal, along with Secretary and Treasury duties still being in the capable hands of Mike Blevins and Cheryl Spencer, respectively. Thanks again to the Futrell's for providing the clubhouse in Carson, VA for the meeting. The schedule for 2010 can be viewed on the Home page of this site.

My great, great grandfather, First Lieutenant Andrew Broadus Anderson,
served in Company F of the 53rd VA Infantry. He was acting company
commander during Pickett's Charge, and was severely wounded by a bullet
that entered below his left shoulder blade, passed through his torso, &
upon exiting removed part of his left bicep (he never regained full use
of the arm). He was assisted back to Seminary Ridge by two of his
soldiers. During the retreat, he was fortunate enough to be placed in a
wagon for the journey to Staunton, & then proceeded by rail to Richmond.

Last year, I placed a second marker on his grave (located in a family
cemetery in Halifax County) to record his Civil War service with the 53rd VA.
Also, I loaned his frock coat to the Gettysburg Visitor's Center Museum, where it is currently on display. This is his prewar VA Militia frock coat (69th VA Militia Regiment); he only wore this uniform in 1861, so it was not at Gettysburg.

Thanks for preserving the legacy of the 53rd VA Infantry. 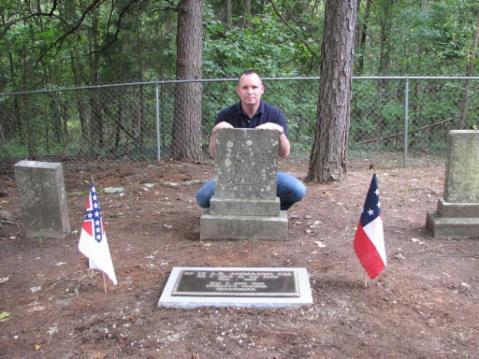 Unit Meeting Was Held at the Clubhouse at Carson, VA

The 53rd held it's annual meeting the clubhouse in Carson, VA. Thanks again to Patti Futrell for graciously allowing the unit to come down. Some by-laws were discussed and voted upon. Also, the schedule for 2009 was voted on by the unit members. The schedule can be viewed on the Home page of this site.

Lets hope and pray for a safe and enjoyable year!

Company H returned to Hollywood Cemetery this chilly Saturday to commemorate five more original members of the 53rd Virginia. Each of these men received a new headstone. Colonel Blevins and Captain Durvin led the dedication of Milton Carlton and George Hargrove of Company D, Robert Eggleston and Weldon High of Company K, and Marion Dove of Company G. Scott Wyatt led the presentation of the colors of the United States, Confederate States, and Virginia.

Many members were able to attend this memorial. It is always an honor to remember those who served. As reenactors of the 53rd Virginia, it feels like an even greater honor to be a part of this unit when you commemorate those who were really there. 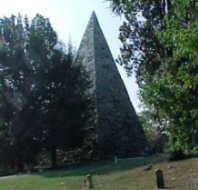 Earlier, we commemorated the 144th Anniversary of the battle of Gettysburg, often referred to as the turning point in the American Civil War. There is no doubt that Gettysburg is one of the most renowned battles of the entire war and that Pickett’s Charge is the most recognizable event of those three days. This grand assault is made famous, not by its ultimate failure, but by the courage and valor of its participants.

On July 3rd, 1863, approximately 15,000 southern soldiers were ordered to cross nearly one mile of open ground under a constant barrage, to attack a nearly impervious enemy position. Among those 15,000 men stood the 53rd Virginia Volunteer Infantry Regiment. As part of Armistead’s Brigade, the 53rd Virginia was at the center of the chaos and paid dearly for its position. On that day, the regiment began 466 strong but suffered 213 losses, equaling forty-six percent of its total. Among its casualties were thirty-four killed, forty-four wounded, and 135 captured, with fifty-seven of those taken prisoner also having been wounded.

We are here to pay our respects to Private George F. Adams, Private William T. Allen, Private John W. Ammons, Private Benjamin F. Bendall, Private Charles D. Binns, Private Major E. Binns, Captain William Harvie Bray, and Corporal John F. Burch. Among these eight members from the 53rd Virginia, at least seven participated directly in Pickett’s Charge. Of those seven, two were wounded, four were wounded and taken prisoner. However, within three months, all four would die from their wounds. Only one of these soldiers appears to have survived that day unscathed. These men reflect the desperation of that charge and the impact felt among the entire regiment. It can be assured that the soldiers of the 53rd Virginia never forgot the sacrifices of their comrades and that we should never forget the 53rd Virginia Volunteer Infantry Regiment. For this reason, we salute them today. 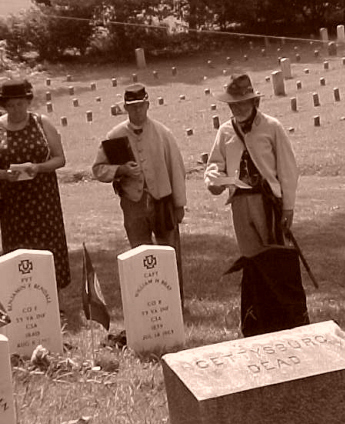 Captain Durvin reading a eulogy over the grave of Capt. William Bray,
with Major Blevins standing by.