Company H during the Reenacting Years

The modern day version of Company H, 53rd Virginia, came into existence in July of 1990. Out of another reenacting unit called "Mahone's Brigade" came a small group of individuals that wanted to go in another direction. This group, which included present members Ronnie Durvin and Wingate Futrell, organized Company H, 53rd Virginia, into a brand new reenacting unit. The very first flag of the unit was made by Wingate, and saw action immediately. In August of 1990, the Mattaponi Guards took part in their first event as a unit, in a parade at Walkerton, VA. The first of many parades attended by Company H. It was there that the long history of today's unit began it's reenacting story. 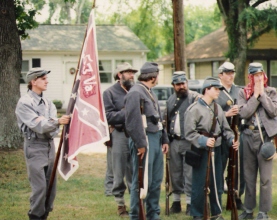 Just like today, Company H took part in both small and large scale events in the early days. For instance, in 1991, the unit held a very small event at the Brigg's House in Emporia, reenacting the Hicksford Raid of 1864. A couple months later, in July of that same year, they made the first trip as a unit to Gettysburg, which is always a big scale event. 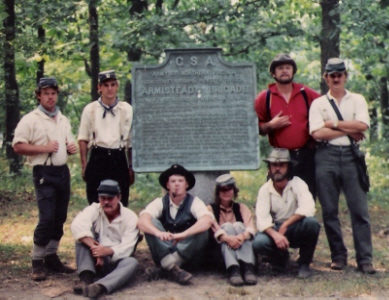 Most of the original unit at Gettysburg, 1991

After winning 1st place for specialty units in the "Loyalty Days" parade of Mechanicsville, Va, in May 1992, Company H started what became an annual event for many years to come. For the next decade, Company H attended and/or hosted an event at Stratford Hall, birthplace of Robert E. Lee. This event, which was usually held in June, always had one thing which could be counted on: rain. It became a tradition. Sometimes it would be more than rain, as some members could relate. In June of 1994, Captain Durvin, Corporal (at that time) Mike Blevins, and Troy Fallin of the 13th VA had all arrived at Stratford early, in the midst of a strom. As the three conversed, lightning struck an oak tree less than 50 yards away, bringing it crashing to the ground. These three veterans were not shaken, and continued to converse and hydrate their bodies with special drink, in the face of danger. Only those with harden nerves such as these are ready to lead men into battle. Besides the rain, Stratford Hall became an annual event close to the units heart for many years. 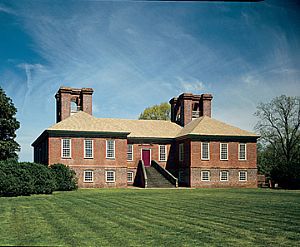 Some other events that the unit began going to in those early days, which became annual events for years to come, included the parade in Montross, VA; the October event at Cedar Creek; in November, the reenactment at Fort Branch, N.C.; and also down at Endview, near Newport News, VA. For better or worse, only Cedar Creek is still on the annual schedule as of 2007. Maybe for the better when it comes to Fort Branch, as Ronnie may agree. During the 1995 event, Ronnie broke his leg while battling against Federal troops. Ronnie thankfully recovered quickly and returned to combat within months, making this just another example of why Mr. Durvin is the ultimate reenactor.

There were many great events during the 1990s. Some of the best all-around events are usually the smaller ones, such as at Endview. Large events are usually logistical nightmares, with unorganized battle scenarios. There were some high notes for large events, such as the 135th Gettysburg in 1998. An example of a large event that was not very popular, and a logistical nightmare, was the Wilderness event in 1996. Like many things though, reenacting can be what each person makes of it themselves.

As the 1990s closed, a new century opened with more adventures for the members of the 53rd Virginia, Company H.

In the year 2000, the 53rd took part in several events, such as the Battle of Chancellorsville at Fort Pickett, VA, and the annual event at Fort Branch, in N.C.

The 53rd spent much of the year preparing for its unit-sponsored event at Shirley Plantation in September. For a number of years Shirley was a regular event for the 53rd. Lots of coordination and work weekends took place throughout the year.

-During the Berkeley event in April, Brevet Corporal Richard Oates demonstrated his now famous "Beaverdam Lope" up a hill during regimental drill, covering ground quicker than all his comrades.

-Tom Jones was given the title of "Chief Woodsplitter" for his excellent job at the Shirley Plantation work days.

-At the New Market event in May, the 53rd found itself camped so close to Interstate 81 (the highway splits the historic battlefield) that the company fly was tied to the fence next to the road. Tractor-trailers were blowing their horns at the Confederate battle flags day and night.

-The late Private Jerry Draper attended his first event at First Manassas. This event was a very hot summer affair, with nearly 200 reenactors being treated for heat related issues.

-During 2001 members of the unit were able to participate as extras in the filming of the movie "Gods and Generals".

-The Shirley Plantation event in late September, organized and managed by the 53rd VA, was a success. The terrorist attacks of September 11th still loomed large over every day life.

-2001 was very dry, and by November all outside fires were banned. At Fort Branch, Company H jokingly placed their lanterns in a group on the ground to simulate camp fires for the weekend. Luckily that event was unseasonably warm, so fires were not needed for warmth.